I don’t know about you but after the tough year we’ve all had, the one thing I’m most looking forward to is traveling again and there’s no one I’d rather go on a vacation with than my beloved pooches. Back in the day, a road trip was the only way you could travel with your dogs. However, with more airlines now accommodating pets on their flights, this dream can become a reality. Sure, it’s not as simple as packing a bag for them and boarding the flight but it can be done. Read on to find out how. 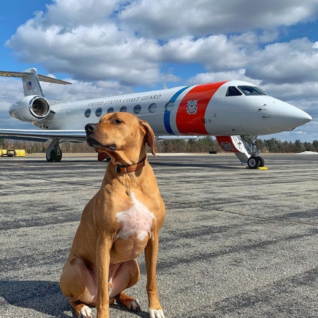 Will they be good fliers?

Right off the bat, let me tell you that flying is not for all dogs. Take a minute to think about the personality of your pooch and consider if they will be okay on an airplane. Not only will you be removing them from familiar surroundings but you will also be exposing them to many stressors. For one, it can be quite loud in a plane with roaring engines, hundreds of people, and crying babies. Then there’s turbulence, changes in air pressure, and being confined for hours on end. If your dog is the anxious kind, it may not be worth putting them through all that stress. They’re just going to be uncomfortable throughout the journey and so will you. You also need to be careful if you have a brachycephalic (short-muzzled) breed like a pug, shih tzu, chihuahua etc. as they could face respiratory challenges if it gets too hot or humid. Most airlines don’t allow these dogs to travel in cargo but even being confined in a carrier could cause anxiety and breathing issues, so talk to your vet first.

If you think your furbaby will be more than fine on an airplane, here’s what you need to factor in next. Ideally, you’d want your doggo to be with you at all times but whether or not they can travel in the cabin comes down to their size. If they’re too large and not a working dog (service dog or emotional support animal), you will have to check them in as cargo. Different airlines have different requirements when it comes to crate size, food and water supply, medical records, other paperwork, age, and even the breed. It’s best to refer to the specific airline’s website or contact customer service to get more information.

If your pooch meets the size requirements, they can travel in the cabin with you. Again, your dog must be in an airline-approved carrier that fits under the seat and they should be able to sit, stand, turn around, and lie down comfortably. Hard-sided carriers that are non-collapsible shouldn’t exceed the under-seat dimensions. Soft-sided carriers should also be able to fit without having to excessively collapse it. They should be secure, water-resistant, and have ventilation on at least two sides. Depending on the airline, the fee for in-cabin travel is around $75-$200. If your dog is an ESA, they’re allowed to be outside of the pet carrier but they should be well-behaved and not cause any trouble. 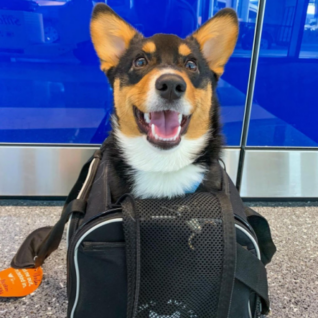 Canis lupus familiaris— man’s best friend! The modern doggo is a domesticated descendant of wolves, selectively bred over many millennia for various behaviors and physical attributes. Doggos come in many shapes and sizes, but this race represents a typical medium or large working breed (such as shepherds, mastiffs, or retrievers) that has gained intelligence beyond normal animals, typically through the awaken spell or similar magic.

Physical Description: A doggo is a furry, tailed quadruped with an omnivorous diet, but which greatly prefers meat-based meals. It has powerful muscles and facial features often found to be adorable by humans.

Society: Doggos are pack animals that greatly value their immediate family unit, and will often go to great lengths to protect their loved ones. They love meeting new people and other doggos, but have been known to get jealous if not given enough attention.

Alignment and Religion: When well treated and well socialized, doggos are typically good aligned. Doggos are usually unconcerned by matters of religion, but when they worship they typically worship figures associated with hunting, working, food, or play.

Adventurers: Doggos love the recognition of doing a job and doing it well. Many are happy to be the family pet and guardian, but even more doggos are working class creatures that love to get their hands dirty, whether it’s herding sheep or hunting down escaped criminals and magical monsters.

Bred to Work: Some breeds of doggos are bred for specific purposes, though are usually less hardy as a result. Doggos bred for specific tasks gain Skill Focus as a bonus feat, and must choose one of the following skills with that feat: Acrobatics, Climb, Diplomacy, Handle Animal, Intimidate, Perception, Survival, or Swim. This trait replaces determined.

VERY Fast: Some doggos run VERY fast at incredible hihg speeds! Doggos with this ability have a base speed of 50 feet, but their bite attack does damage as a creature two sizes lower (1d3 for a medium doggo) and it becomes a secondary attack. This trait modifies the more bite than bark racial trait.

Smol: Whether they’re just stuck looking like a pupper or are a breed that fits in a bag, these doggos just don’t have the mass of the others. They are Small size, and usually have yapping accents when speaking Bork. Their ability score adjustments are +2 Dexterity, +2 Charisma, and -2 Intelligence. This trait modifies the size and ability score racial traits.

Wet Paws: Certain breeds of doggo, such as the Newfoundland, are exceptional swimmers. These doggos receive a swim speed equal to half of their base land speed. As normal, they receive a +8 racial bonus to swim checks. This trait replaces the chaser racial trait.

You can’t hold in your drool, but it works!

Benefit: You can hold a spell focus in your mouth without incurring a spell failure chance when casting spells with verbal components or using abilities that have audible components. Also, your speech is more-or-less intelligible, despite the slurring.

MENTAL STIMULATION IS IMPORTANT FOR YOUR DOG’S WELLBEING

Do you sometimes worry that your furry family members do not get the daily mental stimulation they need? Studies show that boredom can have a serious impact on the well-being of our dogs. Dogs who experience boredom regularly have a higher chance of becoming sick and developing mental health issues, which can result in a decreased life expectancy.

Go Dogo is an intelligent and interactive game for dogs, which helps you to include mental stimulation in your dog’s day. It lets your dog earn treats by solving challenges in the game. Go Dogo is based on the concept that dogs love to work for their food and learn best through positive reinforcement – one treat at a time.

Helps you to give your dog daily mental stimulation

Your dog gets feedback when a task is performed correctly

DON’T TAKE OUR WORD FOR IT!

Go Dogo is the mental stimulation solution you were looking for! But don’t take our word for it. Watch Babette and Isabella talk about what changed since their dogs, Kida and Manse respectively, started playing Go Dogo.

He quickly understood what he had to do to get treats. Whenever we got to a new challenge in the game, he eagerly tried different things, until he found out what would release the treat. When I turned off the TV, Manse kept looking at Go Dogo, hoping that I would start another game for him. The best thing about Go Dogo is to see how focused and happy Manse is while playing the game. We love seeing his happy face and his wagging tail whenever we start a Go Dogo workout.

Daily mental stimulation is one of the most important things you can give to your dog.

Just like humans, dogs not only need daily physical exercise but also a chance to use their brain. Studies have shown that by providing daily mental stimulation for your dog you decrease the risk of developing problem behaviours such as reactivity, separation anxiety as well as destructive behaviours caused by boredom. This is why I strongly recommend Go Dogo as a daily helper in providing the mental stimulation your dog needs.

Kida and I are really happy about Go Dogo.

It’s helpful and fun for both of us. As a full-time student, my days are often filled with reading and writing papers. On those busy days, it’s a huge help to start a Go Dogo session for Kida while I am studying. Kida has fun and gets a good mental workout while I can take care of the things I have to get done. It’s an extra bonus to see how happy Kida is about the game, she simply doesn’t want to stop once she’s started.